Board of Directors, Roles & Responsibilities

The PMI Rochester Chapter Elections for Board of Directors roles nomination period is now CLOSED!

Learn more about the Detailed Roles and Responsibilities and Election Policy.

PMI Rochester Chapter elections have begun and your participation in this process is greatly appreciated.

On Monday morning (07/18) you must have received an email from eballot.com with the subject line: "Election Open!! - PMI Rochester, NY Chapter - Board Election", which contains your ballot, user name, and password.

If you have not received it, please check your SPAM folder, since it was not sent through our Chapter email and we definitely do not want you to miss the chance to cast your vote.

The email is also asking you to ratify the chapter’s UPDATED Bylaws, please open the link to review them.

The election and ratification period concludes on Friday, August 12, 2022, at 11:59 PM Eastern Time.

Should you have any questions, please contact the PMI Rochester Chapter Nominations and Election Committee, at elections@pmirochester.org.

Chris O’Brien earned her PMI Project Management Professional credential in 2016. In her 24+ years at Cornell University, she started as a software developer, moved into Tech Lead roles and then transitioned into Project Manager roles. She has led small teams on short projects as well as large teams through multiyear projects. Chris was awarded the PMI Rochester Chapter’s Project Manager Excellence Award for 2019 for her strong project leadership and leading her team to turn this red project around and realize a successful go-live on schedule, in scope, and 33% under budget. Chris and her team also won the prestigious 2018 Cornell University President’s Employee Excellence ONE Cornell award. She enjoys mentoring and team building. Chris is currently serving as VP of the Ithaca Branch since 2019. In this role, she rebuilt the Ithaca Branch volunteer team and shared her vision of “if we build it, they will come” to revitalize the Ithaca area PMI Rochester Chapter members. Prior to the pandemic, the Ithaca Branch held several hybrid meetings which were well attended. Since the pandemic, the Ithaca Branch has continued to host virtual meetings bringing PDU-earning opportunities to the membership. Another positive outcome of the pandemic, which forced all PMI events to be virtual, was that Chris was able to mentor a team of 4 students for the 2020 PMI ROC the Project (the team placed 1st in the competition). She also served as the Board liaison for the 2020 PMI Rochester Chapter elections. With her professional knife throwing husband, she hosted team building events to teach teams how to throw knives and tomahawks. She believes that by building relationships, teams are better positioned to weather the storms that invariably happen during projects. Chris founded and continues to lead an informal group at Cornell called “Snack & Share” that has been meeting monthly-ish for the last 9+ years to share knowledge, tips & techniques, and network. This group has expanded from a few to close to 40 project managers, business analysts and other leaders from around campus. Chris lives in Ithaca with her husband Paul and two Australian Shepherds (Fleck and Chunk). She graduated from King’s College in Wilkes-Barre, PA with a bachelor’s degree in Computers and Information Systems. She enjoys performance work with her dogs (obedience, rally, agility, barn hunt, lure coursing, dock diving, and nose work) and has also taught several Canine Good Citizenship (CGC) classes for her local dog training club where she previously served on the Training Committee as well as the newsletter editor. “It’s been a challenging time for all of us as we adapt to being remote however this has also expanded our network and learning opportunities – both in our professional and volunteer lives. It is also providing me the opportunity to run for president of the PMI Rochester Chapter. I have received so many valued professional development opportunities through my participation in PMI and as a Board member since 2019. I want to continue to give back to the Chapter and the Ithaca Branch members. I look forward to being able to continue to serve the Chapter in this capacity.”

Brian has been a member of the PMI Rochester chapter since May 2008. He was appointed by the Board to the role of VP of Governance in 2019 when the seat was vacated. Prior to this Brian served as Executive VP, President and Past-President. He was the Project Manager for the 2017 Region 4 Conference, Operations Manager for Social Good projects and is a Chapter Trustee. Additionally, Brian has been a speaker at Chapter Meetings and the PDD as well as the PMI North American Leadership Institute Meeting. As VP of Governance Brian brings a solid understand of Chapter operations and strategy. He’s built relationships with members of PMI GHQ (e.g., Region Mentors, Chapter Partners, Ethics Insight Team) and has leveraged this experience for the betterment of the Chapter. Since being appointed to the VP of Governance role in 2019 Brian has identified initiatives to bring value to the Chapter and he will maintain focus on delivering these initiatives if elected. Brian has served in project management since 1996 and has successfully delivered projects in the transportation, security, IT and technology industries. Brian is a servant leader and has served in roles as Project Manager, Program Manager and Manager of a Project Management Office. Brian earned his BSEE (Michigan Technological University), his MBA (Indiana University) and a Masters Degree in Project Management (Western Carolina University). Brian lives in Livonia, NY with his wife (Wendy), dog (Potato) and three cats (Clifford, Stella and Roxy). His hobbies include music, reading and gaming. He also has a passion for (translated, obsession with) Pink Floyd and has over 1,800 Pink Floyd related CDs.

My journey in project/program management began back when I was a graduate student, I was given the opportunity to intern for Monroe County’s Department of Public Health. I held the responsibility of assisting Administrator’s with program evaluation and development of a systematic and efficient way to track numerous program-related issues regarding quality assurance, and policy changes based on the New York State Department of Health guidelines. Since then, I’ve held a few positions, and eventually landed at my current employer Excellus Blue Cross Blue Shield. While at Excellus, I have gained a little over five years’ experience leading projects. This includes HEDIS projects in the Health Care Improvement department, and currently, analytics and data resources in the Analytics, Data, and Technology division of the organization. I’ve been a member of PMI Rochester since 2018 and a volunteer since 2019. It’s been a pleasure to meet other volunteers and members of PMI Rochester. In my free time, I enjoy taking care of all 43 of my plants, walking, and watching YouTube videos. I’m proud to say that I am currently scheduled to take the PMP in fall of 2022.

The role of VP of Marketing & Communications remains vacant.  If you are interested in serving you can either add your name as a write-in candidate duting the Voting Open Window or reach out to any Board Member for more information
about the role or send an email to info@pmirochester.org. 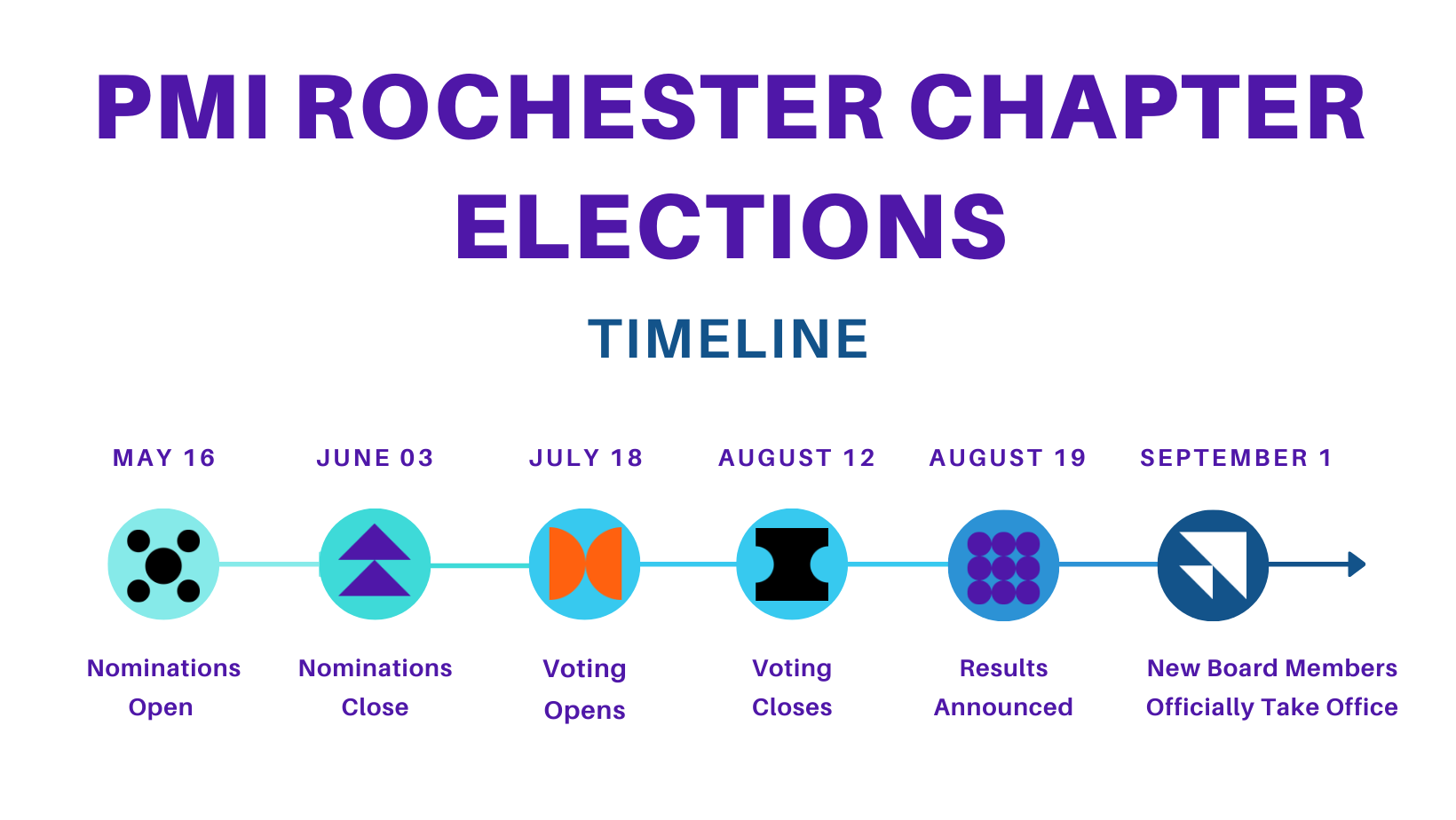